“Make it last forever” Beyonce never ceases to amaze me. With the success of her new self-titled album Beyonce, sales have surpassed the norm. At one point iTunes was frozen, yes Beyonce froze iTunes, which is not a surprised.

With all the amazing videos and songs that completed this album, the song and video Blue which is dedicated to Beyonce and Jay Z’s daughter Blue Ivy; has warmed my soul and made me excited for my future.

The video was filmed in Brazil, where you can see Beyonce dancing and interacting with natives. In the beginning of the video you see a small portion of Beyonce holding Blue Ivy as they walk along the beach and at the end you can see Blue and Beyonce talking and playing in which you can hear Blue trying to pronounce her mother’s name “Been-sy-ay,Been-sy-ay”.

Although the video is dedicated to Blue Ivy, it does not focus on her. Throughout the video you can see the Brazilian culture come alive. From young children dancing all over the streets and beaches, to women lined up in their carnival outfits getting ready for their performance. These scenes show that Brazilian people are not wealthy with money, cars and clothes, but they are still happy and excited about life. At the end of the day they have love, which is all we truly need. I believe that this is what Beyonce is trying to express to us as viewers.

The video is lovely and motivating; nonetheless the words in this song are so moving and striking. Beyonce continues to say “Hold on to me, hold on” “We gotta hold on, I gotta hold on” meaning she wants Blue to hold on and never leave her side. This is the most touching song I have ever heard, it only makes me long for true love and a child in the near future. It was refreshing to see someone so in love with their child and excited about their future together. 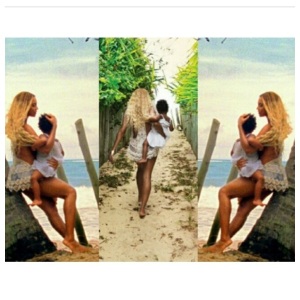